Unlike any presidential campaign I have lived through, the 2024 election cycle is already taking form 3 years out from election day.

According to most of the political pundits, the GOP challenger to President Joe Biden has already been chosen. Former President Donald J Trump, who has not conceded the 2020 election is most likely going to be the nominee. The question remaining is: who will Mr. Trump be running against? 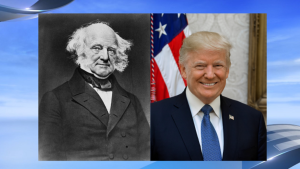 Mr. Trump has been teasing his supporters about a 2024 run but has always stopped short, blaming federal campaign finance rules for preventing him from announcing his intentions. Trump did however reply to a question during an interview on Newsmax about his 2024 plans, “a lot of people are going to be very happy.”

According to Jason Miller, a former top adviser to Donald Trump, the former president will run for the White House in 2024 but he doesn’t expect it to be against current President Joe Biden.

Miller has repeatedly said publicly that he expects Mr. Trump to seek office in the next presidential election. During an interview with Fox Business on Friday, Miller shared his perspective on Trump’s plans.

“I think ultimately in 2024 President Trump does run again. At least that is my hope,” Miller said. “But I don’t think it will be against Joe Biden. I think it will be a Kamala Harris or maybe a Gavin Newsom.”

President Biden and former President Donald Trump are tied in a new poll looking at a potential matchup in the 2024 election — with Trump surging past Biden among independents as polling also shows Biden’s approval ratings tanking.

If the election were held today,  Trump and Biden both have 40% support with 14% saying they would choose another candidate, a Grinnell College National Poll.

Biden, 78, has previously said that he plans to seek reelection. “My plan is to run for reelection. That’s my expectation,” the president told reporters in late March.

During that same press conference Biden was asked about the possibility of a rematch with Trump. He responded by saying he didn’t have any predictions on what the state of the Republican Party would be in a few years.

“Oh, come on. I don’t even think about—I have no idea. I have no idea if there will be a Republican Party. Do you?” Biden said. He also noted that he would fully expect Harris to run as his vice president in the next election.

Many Biden critics have raised concerns about his age, while some have suggested that they believe his mental health is declining. Those claims have not been corroborated or supported by any evidence. Trump, 75, also regularly faces accusations of declining mental and physical health from his critics.

“If Donald Trump runs, and I’m pretty certain that he will, he is going to win the Republican nomination, period,” Morris said.

“Donald J. Trump is running again in 2024, there’s absolutely no doubt about that,” he said. “This movement is on the march. Donald Trump is going to run for president again and I gotta tell you, he’s not gonna be stopped by a bunch of pencil necks in New York City that are putting up these trumped-up charges to try to stop him, it’s only gonna empower him.”

I am in agreement with all 3 gentlemen.

As of today, I can’t see the Democratic establishment getting behind anyone except VP Harris, regardless of her unpopularity. This means that a Trump victory in 2024 is almost a certainty.