Every day millions of Americans jump on social media, assuming they actually logged off the night before, and/or turn on news outlets such as CNN or talk radio.

After a few minutes, many are already engaged emotionally.

Some will call their political representatives, others will light up Twitter with multiple rants, while others visit their Facebook groups for encouragement.

The reality is there are really only 2 politicians that matter right now. Joe Manchin (D-WV) and Kyrsten Sinema (D-AZ)

Mr. Manchin and Ms. Sinema say the 3.5T spending bill the Biden administration is pushing is too ambitious and should be trimmed and means-tested. Far-left Democrats, including Senator Bernie Sanders (D-VT), object to cutting out any major programs, saying instead that overall costs can be cut by making the legislation run for five years instead of 10.

Democrats had planned to use a special procedure to force the $3.5 trillion spending package through the Senate along party lines. The process, known as budget reconciliation, allows some spending and tax measures to avoid the 60-vote filibuster threshold and pass with a simple majority of 51 votes.

Sen. Joe Manchin just dashed their hopes by signaling his opposition to the administration’s proposal to phase out fossil fuels from electricity production.

Without Manchin’s vote for President Biden and the congressional Democrats 3.5T pork-filled spending bill over fossil fuels, the bills’ likelihood of Majority Leader Schumer getting all 50 of his democrats to vote yes, is zero. 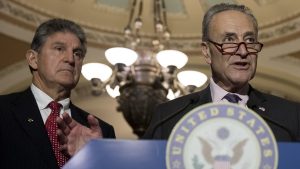 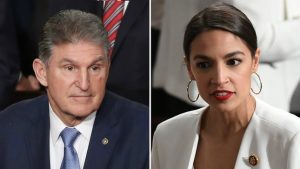 According to The Washingon Times

Mr. Manchin, a moderate Democrat from West Virginia and key vote for the White House’s domestic agenda, has told senior administration officials he will not sign on to the program.

Mr. Biden initially sought to include a $150 billion tax credit plan within his $3.5 trillion expansion of the federal safety net addressing electricity production.

The program would have given federal subsidies to electric utility companies if they switched from coal and natural gas to solar and wind power. Under the plan, utilities that failed to reach a certain carbon reduction threshold annually would face several financial penalties.

Mr. Manchin, chairman of the Senate Energy Committee, was initially tasked with writing the new program into law. After months of negotiations, he told the White House he would be unable to support the plan because of its adverse impact on coal and natural gas, two resources vital to West Virginia’s economy.

Senate Budget Committee Chairman Bernard Sanders penned an op-ed in the state’s largest newspaper, the Charleston Gazette-Mail, attempting to shame Mr. Manchin for his opposition to the package. “Poll after poll shows overwhelming support for this legislation,” wrote Mr. Sanders, a self-described socialist from Vermont. “Yet, the political problem we face is that in a 50-50 Senate we need every Democratic senator to vote ‘yes.’ We now have only 48.” 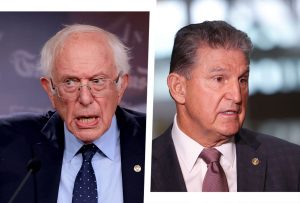 Mr. Manchin, the remaining Democrat in the increasingly Republican West Virginia, quickly responded. “This isn’t the first time an out-of-stater has tried to tell West Virginians what is best for them despite having no relationship to our state,” Mr. Manchin said in a statement.

Arguing that the policies advocated by the $3.5 trillion bills were wrong for a country in the throes of inflation, Mr. Manchin said he would oppose any effort to throw “more money on an already overheated economy.”

“To be clear, again, Congress should proceed with caution on any additional spending and I will not vote for a reckless expansion of government programs,” he said. “No op-ed from a self-declared independent socialist is going to change that.”

I personally believe Mr. Manchin will be able to get several issues removed from the spending bill, the question is how much pork and leftists agenda will he sign off on in the end.